A top list of classic western movies followed by an introduction to the genre ...

24 Man of the West
Anthony Mann was one of the most prominent directors of western movies in the 1950s. Man of the West is one of his most matured and forming a tragedian drama.
Year: 1958 | Director: Anthony Mann

23 High Plain Drifter
One of the best western with Clint Eastwood which also directing this one. A stranger arrives to a town that are threaten by a gang. After showing his skill with weapons, the stranger are asked to protect the town. He accepts being the safeguard but also demands a high and unexpected price.
Year: 1973 | Director: Clint Eastwood

22 Duel in the Sun
Duel in the Sun, written a produced by David O. Selznick, deserve to be mentioned among the best westerns. The emotionally intense acting between Jennifer Jones and Gregory Peck almost hurt and the script is complex enough to make us wonder all the way to the finish.
Year: 1946 | Director: King Vidor

21 Bend of the River 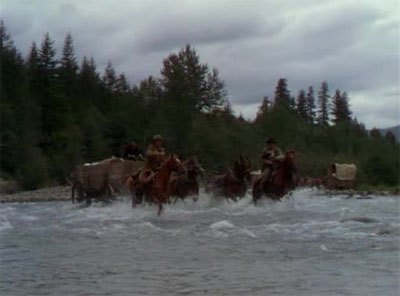 A classic western with the typical theme settlers going to the west for finding a new place to live. They have Glyn McLyntock (James Stewart) as the scout, who is taking the caravan through the plains, through the river and up in the mountains. He will also help with the escort through the dangerous land in which indians and other evil forces. The movie has some naïve features, but on the same time work great as escapism in Technicolor.
Year: 1952
Director: Anthony Mann

20 My Darling Clementine
John Ford is one of the most recognized western directors of all time and his movies always bear something of the old American history of the west. In My Darling Clementine he is telling his version of the famous Wyatt Earp and Doc Holliday camaraderie.
Year: 1946 | Director: John Ford
19 Hour of the Gun
John Sturges return once again to depict the Wyatt Earp-Dock Holiday-Clanton Brothers ten years after his Gunfight at the O.K. Corral film. Hour of the Gun is a western with an ambition to tell the true story and therefore divide from the the legend.
Year: 1967 | Director: John Sturges

18 Rancho Notorious
Fritz Lang as the director and Marlene Dietrich as one of the characters in a splendidly told story. A man is searching for the murderer to his fiancée and follow the traces to a place called “Chuck-a-luck”.
Year: 1952 | Director: Fritz Lang 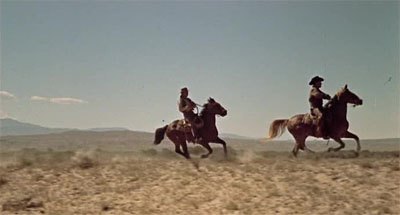 You don’t expect to meet Jack Lemmon in a western movie, but his persona work well even in this genre, which are demonstrated here. He plays against Glenn Ford and the duo creates fine dynamics on the screen. Ford’s character Tom Reece is an experience cowboy and Lemmon’s character Frank Harris is a hotel clerk who wants to have a more exciting life and want to catch up with the girl who for a while stayed on the hotel he worked.
Year: 1958
Director: Delmer Daves

16 How the West Was Won
How the West Was Won includes so much more than a story about a revolver man or a fight between landlords. Here is the American early civilization portrayed in great pictures and integrates a fine story.
Year: 1962 | Directors: John Ford, Henry Hathaway, George Marshall & Richard Thorpe

15 Stagecoach
The breakthrough movie by the western director par excellence, John Ford. Stage Couch depicts some of the essences of western movies with the desolated Monument Valley as fond for human drama in a violent and undomesticated world.
Year: 1939 | Director: John Ford

14 Pat Garrett & Billy the Kid
Kris Kristofferson portraits the outlaw Billy the Kid in a stylized western movie with ingredients of a Bob Dylan soundtrack and violent revolver fights. One of the best attempts to capture the famous story of the antagonistic affair between Billy the Kid and Pat Garrett.
Year: 1973 | Director: Sam Peckinpah

13 The Naked Spur
The best of the five movies Anthony Mann made with James Stewart as the main character. A well constructed plot with a wanted murderer who has been captured and are transported to his hanging. After it being confirmed that there is a reward involved the dynamic in the group changes.
Year: 1953 | Director: Anthony Mann

12 The Gunfighter
Gregory Peck portraits the feared gunfighter Jimmy Ringo that returns to a certain town with the intention to meet a woman he hasn’t seen for a long time. He has left his violent background behind, but he still has to deal with his reputation.
Year: 1950 | Director: Henry King

11 Hombre
Paul Newman plays the unconventional western hero John Russell reminding about Humphrey Bogarts Rick in Casablanca that only show which side he stands on with implicit gestures until a dramatic event forces him to expose it.
Year: 1967 | Director: Martin Ritt

10 The Unforgiven
Revisionist western of the best kind with Clint Eastwood as Bill Munny, former revolver man, but now old and regretful. But after a cut up of a prostitute he once again rides out when his old partner is asking for help.
Year: 1992 | Director: Clint Eastwood

9 The Ballad of Cable Hogue 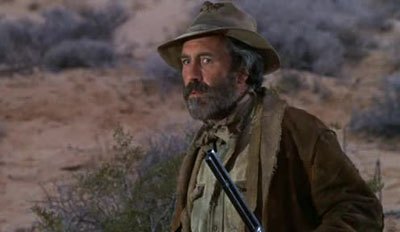 Cable Hogue finds water in the desert on a desolated transport route and acquires the land. Sam Peckinpah has revised the western genre in many ways and the result is both different and sometimes funny.If you can't agree that a car and a motorcycle can be among the props in a classic western, you have to avoid this one.
Year: 1970
Director: Sam Peckinpah

8 Ride the High Country
The ex-sheriff Steve Judd is hired to transport gold trough dangerous territory. To his help he rides with an old and a new partner. The story tells what gold can do with people and their loyalties.
Year: 1962 | Director: Sam Peckinpah

7 Red River
One of the best contribution from Howard Hawks to the genre. John Wayne and Montgomery Clift are the father and son herding cattle to Missouri. Then the son turns against the tyrannical father a bitter confrontation takes place.
Year: 1948 | Director: Howard Hawk

6 The good, the bad and the ugly (Il buono, il brutto, il cattivo)
Sergio Leones masterpiece with Clint Eastwood as Blondie, a bounty hunter with very odd methods. He and Tuco enter a partnership without trust in the quest for a gold treasure. The upper hand between them shifts many times along the way.
Year: 1966 | Director: Sergio Leone

5 Butch Cassidy and the Sundance Kid
A celebrated western movie with the pair-horses Paul Newman and Robert Redford as Butch Cassidy and Sundance Kid. After doing one too many bank jobs they are being hunted by a large force, driving them to Mexico and the ending is classic.
Year: 1969 | Director: George Roy Hill 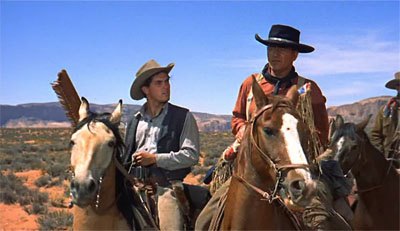 A western movie monumental in its complexity and as storyteller of a hazardous, bygone world. John Wayne comes and goes out through the screen in the intro and the final, which renders two classic film sequences. The scenery of the pompous monumental valley gives this epic story an even greater resonance.
Year: 1956 | Director: John Ford

3 Shane
An iconic western that succeed in many ways. Shane is the man from the vast land that got a job for some settlers who is terrorized by some landowners. A common theme that has been seen over and over again in a western, but Shane is nonetheless a memorable movie. The director George Stevens known for movies like Giant and A Place in the Sun delivers here a great contribution to the western genre.
Year: 1953 | Director: George Stevens

2 The Man Who Shot Liberty Valance
John Ford’s late western film is loaded with symbols and rich of nuances. A senator arrives at Shinbone for attending the funeral of Tom Doniphon. The question is why such a simple man known for drinking attracts a visit from a Washington senator.
Year: 1962 | Director: John Ford

Sam Peckinpah puts a new rawness to the western genre with The Wild Bunch that may be his masterpiece. The movie shows a new kind of esthetic of violence and depicts a couple of desperate humans and their restlessness in a world doesn't seem to have any place for them much longer.
Year: 1969 | Director: Sam Peckinpah

The story of the western frontier in 19th Century America

The Western genre is a bit peculiar by being so clearly defined to a specific milieu and time. The milieu is North America and in particular the west: the once unexplored land for the civilization, behind “the frontier line”. The time was mainly the second half of the 19th century.

Nevertheless was western one of the first movie genres and become very popular in the 1920s and following decades. The most prominent director was John Ford and in his movies the audience would often see John Wayne, who personified the raucous western in which the modern culture was not yet fully present.

Typical scenerios are the bare land and rocky hills or towns there the saloons became meeting points offering card games, whiskey and girls. The stories often revolve around conflicts there powerful land owners are involved. Not seldom are some lonely drifting man getting involved and increasing the odds for the weaker side. 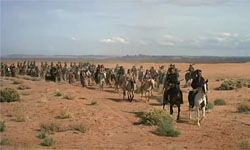 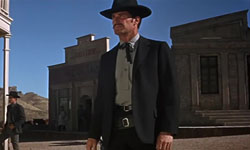 
→ See more top lists in other genres Back to top