An introduction to the genre and a top list of 16 best science Fiction movies ...

The Best Science Fiction Movies according to GreatestMovies.org.

16 Minority Report
The year is 2045 and the crime fighting have been revolutionized to that degree that it almost been totally eliminated thanks to the special ”precrime” police squad. Minority Report is an interesting eyehole into a futuristic scenario with Tom Cruise in the main role.
Year: 2002 | Director: Steven Spielberg

15 The Road Warrior
The Mad Max movies was Australia’s contribution to the sci-fi genre. Mel Gibson does one of his best performance as Max who is the “Road Warrior” in this post-apocalyptic desert world in which gas are more valued than gold. .
Year: 1981 | Director: George Miller

14 Fahrenheit 405
A movie based on a novel by the prominent science fiction author Ray Bradbury and uses the common theme of the genre about a totalitarian society that makes people lose the contact with its cultural tradition and emotional behaviors.
Year: 1966 | Director: François Truffaut

13 Dark City
John Murdoch wakes up in a room with a murdered woman, but remember nothing about her. Soon he meet other people who also seem to have problems with their memory and he begins to suspect that something strange going on in the city. Dark City is a fine stylistic science fiction movie that mixes the ingredients of Dick Tracy with mystery.
Year: 1998 | Director: Alex Proyas

12 THX 1138
A dystopian picture of the future by Star Wars director George Lucas. Some hundred years forward in time the people living underground and a certain medicine that must be taken regularly. Original science fiction in a minimalistic style.
Year: 1971 | Director: George Lucas

11 The Day the Earth Stood Still
An early classic in the genre containing a pacifistic message. The special effects are outdated and may seem ridiculous by today’s standards, but the movie has other merits and the questions raised about the leadership of the world and the ability to protect it with rational actions are still actual.
Year: 1951 | Director: Robert Wise

10 Terminator 2
A high-tech cyborg arrives from another time to assassin a certain John Connor, who is destined to become an important man in the rebellion against the machines in the future. The special effects in Terminator 2 were before its time and the movie was overshadowing its predecessor.
Year: 1991 | Director: James Cameron

9 Back to the Future
Michael J Fox travels in space in this movie hit from the eighties. Strange time paradoxes occur when his character Marty McFly goes backwards in the timeline and meets his parents in his own age. The two following sequels were inferior to the original.
Year: 1985 | Director: Robert Zemeckis

8 Moon
In this British science-fiction film, the threat to humans in the future is not aliens nor machines but corporations. The human race is mining helium-3 from the moon and one of the operators are Sam Bell, at least it is that what he thinks.
Year: 2009 | Director: Duncan Jones

7 Matrix
The action scenes with slow motions and visual effects were innovating and spectacular. Neo lives in a world which is dominated by the machines, but one night some people knock at his door and wants to show him the real world. Great mix of excitement and philosophy.
Year: 1999 | Director: Lana Wachowski & Andy Wachowski

6 The Empire Strikes Back
A terrific sequel to Star Wars and by many ranked as the best in the George Lucas spectacular series. Luke Skywalker meets the Jedi master and preparing to meet Dart Vader representing the dark side.
Year: 1980 | Director: George Lucas

5 Planet of the Apes
A group of astronauts is crash landing in a foreign unknown place. They are soon to discover that human are not the dominate species on the planet. But even more horrifying discoveries are waiting for them until the last astonishing final.
Year: 1968 | Director: Franklin J. Schaffner

4 Alien
A claustrophobic science fiction adventure with Sigourney Weaver as one of the passengers on board a cargo ship on a mission. The excitement is slowly increased until it culminates in an exhausting final.
Year: 1979 | Director: Ridley Scott

3 Star Wars
One of the most spectacular stories ever told in that today has the status of a cult movie. Luke Skywalker is fighting his nemesis Darth Vader in a story that takes place ”A long time ago in a galaxy far far away…”
Year: 1977 | Director: George Lucas

2 2001: A Space Odyssey
An artifact is found and seems to contain some kind of intelligence. A genial overture and then an unforgettable space epos with a powerful finale.
Year: 1968 | Director: Stanley Kubrick

1 Blade Runner
A film noir set in Los Angeles anno 2019. Deckard is a so-called ”Blade runner” with the mission to retire ”replicants”, a kind of androids. A science fiction masterpiece with an unpleasant view of a distant future enriched with philosophic perspectives.
Year: 1982 | Director: Ridley Scott

Into the worlds beyond our reality

The science fiction movie goes beyond the present and the ordinary with features like artificial worlds, extra-terrestrial life forms and futuristic technology. In the history of film A Trip to the Moon (Le Voyage dans la lune, 1902) by Georges Méliès was one of the first examples in this genre.

Science Fiction in books and movies are often presentations of a dystopia that have emerged in a distant future there the human race is threatened by the machines as in the Matrix (1999) and Terminator (1984) or by hostile aliens as in The War of the Worlds (1953, remake 2005) and Alien (1979).

It can also be about the development of an unnatural world in which the emotions in human nature has been oppressed and part of its culture has been forgotten or forbidden. Among movies containing this theme are Fahrenheit 405 (1966) and THX 1138 (1971). 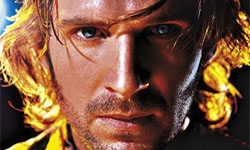 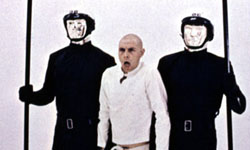 
→ See more top lists in other genres
Back to top