An article about the sub-genre high school films ...

The High school movie (or college movie which it is also called even that almost every movie of this kind are taking place before college) has sort of become a distinct genre, fertilized by the romantic comedy, relationship dramas and sometimes horror movies. Over the years the collection of movies that can be part of this genre have grown very big and therefore are this article only highlighting a few, some of the most important and the best of them. 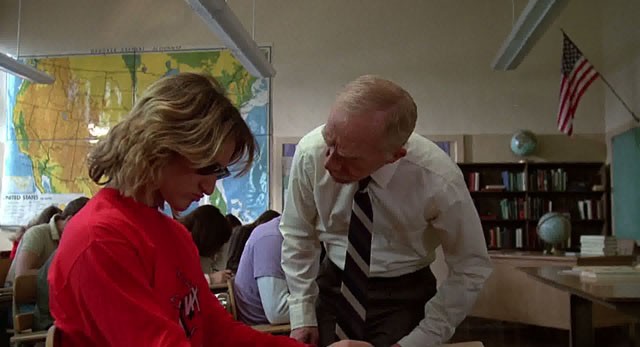 A distinction can be drawn between movies depicting teenagers in a merely entertaining way and those who includes a deeper message. The entertainment often revolves around gross out humor and sex where the other category often focuses on the teenagers enrage over the conventional society mastered by the view of adults. These categories do of course blend together in some cases.

Among movies which efforts are to entertain Porky’s (1982), American Pie (1999), 10 Things I Hate About You (1999) and Road Trip (2000) are some examples. The Perks of Being a Wallflower (2012) is trying to be substantial, but may fail in that attempt to a certain degree. The To Do List (2013) are trying to give a new angle of that goes around in a teenagers head, but the gross out humor takes the upper hand.

American Pie does what many other high school movies does by treating the yet-to-discover-sexuality as something that consists of crude jokes together with idealistic romance. In American Pie the subject of sexuality goes from being something new and exciting to a motif for embarrassments. The key moment in the side of embarrassment is an unorthodox and quite nasty usage of a pie. The gross out humor is definitely present, but it is also a movie with a good working story.

Other elements for a high school film to be re recognize is the nerds versus the cool guys in which the cool guys must at least experience one hard defeat (this happens to the character Steve, played by Seann William Scott when drinking a “poisoned” beer).

Patrik (Heath Ledger) trying hard to get attention from Kat (Julia Stiles) in 10 Things I Hate About You.

10 Things I Hate About You from the same year are taking place in Parma, Ohio in a wealthy environment. Many comparisons can be done with Can’t Hardly Wait (1999), but the story is some worse and the characters don’t engage enough. Something that although seems fresh with this film is that the races are mixed and the non white Americans are not only assigned to smaller parts. (But the hero and heroine are of course both white.) It can also be noticed that the female character Kat (Julia Stiles) is very non conformist, but it never gets subversive at any points.

What the title refers to the above mentioned Can’t Hardly Wait is quite obvious in a genre that gets its most fuel from sexuality. Can’t Hardly Wait does well as both being entertaining with crazy parties and form a drama with layers of romantic relationships. 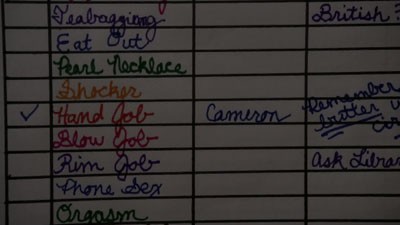 The to do list for a female teenager anno 2013 according to the film with the same name.

Some of the latest contributions to the high school movies are The To Do List (2013). It has the wore out theme about a nerdy and blameless (that sometimes alternative to an unattractive girl going attractive) teenage girl that suddenly moving in the opposite direction – compare for example with She’s All That (1999). Brandy (Audrey Plaza) is the over ambitious student that don’t care about parties and boys. But after her graduation, she got the sudden idea to write a “To Do list” of plenty sexual things (blow job, hand job and some more esoterically sexual dealings). Some parts of the list she has no clue about and trying to find these slang expressions in the Encyclopedia of Britannica.

The movie is daring and sweet at the same time the sex is almost constantly in focus. The qualities lay in the humor that sometimes is good. Even if teenage thoughts are dominating the context in the movie where is no rebellion against the society or adults in this movie, and in the end the non dangerous ties to friends and family wins over the attraction to the opposite sex.

Almost in its own leagues among high school films we find Fast Times at Ridgemont High (1982) which still deserves attention. It is few, if any, college movies that succeeds so well as this one to create a rich gallery of great characters. There is no message in the same way as can be noticed in Breakfast Club or Dazed and Confused, but the assortment of characters makes it interesting and the atmosphere is wonderful. Once again the theme centers a lot around teenage sexuality and this film also contain nudity, which otherwise have been indisposed in most of the later college films.

The film critic Robin Wood suggests Fast Times at Ridgemont High (1982) as the first movie that include all themes that later would be repeated in different variations in following college movies. He also mentions that many movies in the genre quite surprisingly have literary originals by mentioning these examples: Clueless (Emma by Jane Austen), 10 Things I Hate About You (The Taming of the shrew by William Shakespeare), Whatever It Takes (Cyrano de Bergerac by Edmond Rostand), She’s All That (Pygmalion by George Bernard Shaw), Cruel Intentions (Les Liaisons Dangereuses by Choderlos de Laclos) and Get Over It (A Midsummer’s Night by William Shakespeare).

Breakfast Club (1985) concentrates on five teenagers that got detention and are sitting it off on a Saturday. They all got different personalities – "the criminal", "the athlete", "the brain", "the basket case" and "the princess" – and don’t normally hang out. But as it will turn out they got something in common: they are all teenagers with personal problems which in most cases relates to their parents.

Dazed and Confused (1993) is about the point in life then you leave high school and are choosing between college and a job. The main theme may be when the freedom of adolescent finally meets up with the conformism and responsibility that belongs to adult life. And the raised question is: Why must you make the adjustment?

The characters in Richard Linklater’s movie are complex and the realism on the whole is on a different level than nearly all high school movies. Dazed and Confused shows reminiscence to American Graffiti (1973) and both movies are great portrayals of teenagers leaving the days of being a teenager.

The movies chosen for this article all representing typical themes of the sub genre in focus. There were of course other movies that could have been mentioned. Some other films that may not share the typical features of the typical high school movies, but deserves to be mention are:

Clueless (1995) a high school movie with a satiric twist.
Election (1999) a black comedy taking place in a high school.
Gregory’s Girl (1981) a British film depicting young teenagers in a fun and creative way.